Early QKD systems required the use of an otherwise dark optical fibre link to avoid contamination of the delicate quantum signals by light from other data traffic. Dedicating an optical fibre in this way represented a significant deployment cost and it is commercially important to be able to send quantum signals along the same optical fibre as classical data.

Toshiba has developed systems that can distribute quantum keys over optical fibres while they are also carrying classical traffic. Technolgies have been optimised for core and metro networks where high data rates and performance are key concerns and separately for access networks where limiting the cost of serving large numbers of users is important.

Reducing the cost of delivering a QKD service to end users can be achieved using a Quantum Access Network in which many users are served by a single quantum receiver. In this configuration multiple users share a single photon detector. Only cheaper components are required by the customers transmitting to the quantum reciever. A standard passive optical fibre combiner is used, as widely deployed in fibre-to-the-business and fibre-to-the-home applications.

Toshiba has worked to optimise the achitecture for quantum access networks and to reduce the impact of light scattering in the fibres, enabling up to 128 quantum users in dual feeder network. Such access networks provide the connection between multiple users endpoints, each with a conventional GPON router with a QAN transmitter for quantum key distribution, and the core or metro network. Passive optical networks (PONs) are a cost-effective method for connection and a passive power splitter distributes signals to and from the GPON network terminal, which includes the QAN receiver. Full pwer transmission of GPON signals allows for the best compatibility with existing components. 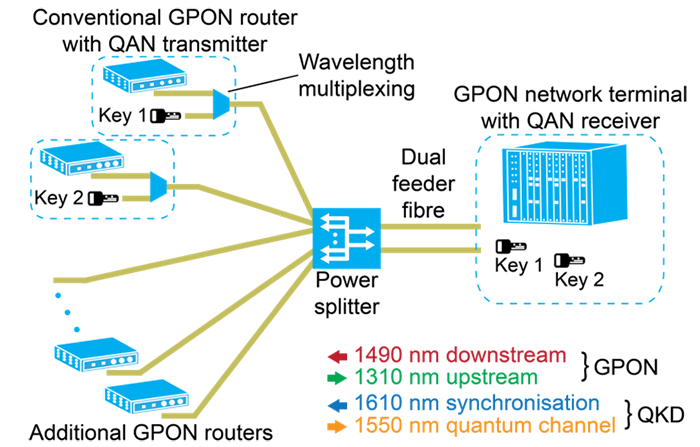